Compete: A Powerful Force On The Road To Greatness

Zito Can Teach You About What It Takes

6 Actions To Gain An Edge During COVID

Once again, the boys saw the importance of the consistent 7:00AM wake up to be able to manage an early start. The boys quickly reflected on what they needed to accomplish for the day, showered, downed an energy bar and then headed off to the batting cages.

As we headed off to the field for our meeting with CBA - it was unclear the effect the late night game would have on the boys. The Clutch was the home team and CBA came to play - with a couple of home runs to start the game and some fielding errors the boys found themselves down 5-0 with no outs in the 1st inning.

At this point, we brought in Jordan Walczykowski to pitch and he was able to get us out of the inning with two strikeouts and a ground ball.

One of the themes for the Clutch for the entire year was accountability to each other. Some of the players had a tough time with the quick turn around and were removed from the game. This is a big life lesson that we teach at Hard 90 to do your very best by being ready to play regardless of the circumstances.

CBA clearly had their #1 pitcher on the mound - sporting a fastball in the low 70s with a strong off speed pitch. Two ks and a pop out and the Clutch was back on defense. Lucky for us, Jordan held serve with a k and two ground outs.

Heading to the bottom of the 2nd, the Clutch was still down 5-0. All that changed on the first at bat, Carter Gustafson took a monstrous hack on the first pitch and fouled it straight back. One of the things that we worked on as a team was an aggressive approach at the plate - “big daddy hacks” - as the team called them - so the entire Clutch team encouraged Carter to stay aggressive and their it was on the next pitch, Carter hit a tank putting the 1st run on the board for the Clutch.

One batter later, Taylor Sutton took a “big daddy hack” and the score was now 5-2 in favor of CBA - but you could feel the momentum of the game subtly shifting.

Two more ks and a pickoff and Jordan had the Clutch back in the dugout to hit again. Back at the top of the order - singles by Jordan and Ben Ransi and Carter Gustafson found himself at the plate with 2 outs and a chance to tie the ball game. Carter wasted no time on on the first pitch hit a no doubter to tie the game 5-5. New ball game and a strong momentum shift.

The 4th and top half of the 5th inning was uneventful - and then in the bottom of the 5th, Captain Jack Spero stepped up to the plate with one thing on his mind - you guessed it - “big daddy hacks”. Jack hit a bomb to left giving the Clutch their first lead of the game.

In the top of the 6th - 2Ks and a pop out and the W goes to the Clutch. Big victory - with some big time performances by Carter Gustafson, Taylor Sutton and Jack Spero with “Clutch” home runs and 6 no hit innings by Jordan Walczykowski recording 10Ks.

With this emotional victory under our belts, the Clutch headed back to the barracks to change and have a brief team celebration.

The team then checked out of the Village and headed to Barnyard Swing for some team bonding over mini golf and then back to Maskot’s for a team lunch. Given the close victory and exciting comeback - energy was high and the boys were reveling in their time at Cooperstown. 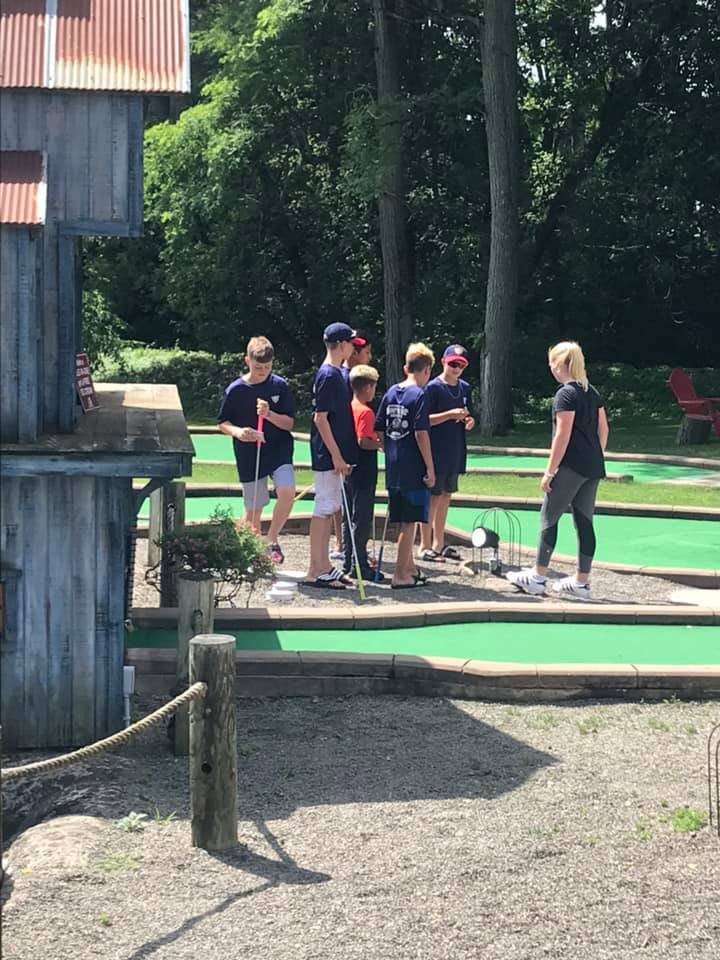 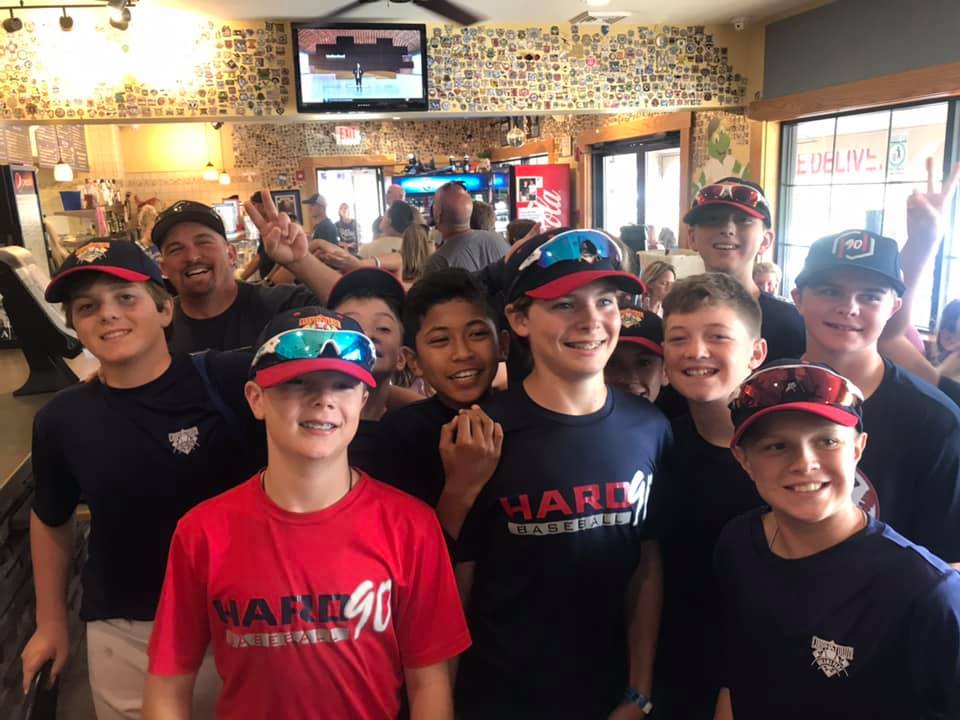 At 1:30PM, the Clutch reported back to the field to take on the Midland Park Panthers from New Jersey. There was a ton of buzz around the park about this great hitting team from California that was undefeated heading into game 5.

The Clutch started on offense and Captain Jack once again did his job - swinging hard at the second pitch and sending it into orbit. A message that we worked on for months that if you were going to beat the Clutch in Cooperstown you were going to have to out hit us - because we were going to swing the bat.

Nick Rodriguez shut the door in the bottom of the 3rd and it was 10-1 heading to the 4th. In the top of the 4th, Ian Peatross had a nice double to make it 11-1.

The rest of the 4th was relatively uneventful and it was 12-3 heading into the 5th. To start the 5th, Ty Moran swung at the first pitch hitting a bomb to get the inning started. Two batters later Carter Gustafson hit a two run home run. A few singles later and Ty Moran found himself at the plate with the bases loaded - he promptly hit a moonshot for a grand slam and his second home run of the inning. With the game out of hand, the Clutch again exercised restraint and started working on a two strike approach with a game of pepper to end the inning.

The team headed back to the barracks to get ready for their final pool play game.

At 6:30PM, the team started their final pool play game against the Horsham Hounds from Pennsylvania. The 1st inning was rather uneventful as neither team scored. After pitching a scoreless second, Brady Rea got the Clutch on the board with a home run. A few batters later, Ty Moran hit a 2 run home run. Not be outdone, Jack Spero, Jordan Walczykowski, Nick Rodriguez also got in the home run act making it 8-0 after two complete innings.

Ty Moran pitched a scoreless 3rd and Taylor Sutton and Eric Erdmann added homeruns to make it 10-0. In the 5th, the Clutch called upon their catcher Scotty Buckmaster to throw his first inning of the year. Scotty pitched a great frame only surrending 1 run.

In the bottom of the 5th, the Clutch had the opportunity to participate in the spirit of Cooperstown Dreams Park. The Hounds had a pitcher that had not yet pitched in Cooperstown - but the coach was concerned with how hard our team hit the ball that it would be a safety issue. The Clutch responded by peppering away the 5th - allowing this pitcher an opportunity of a lifetime to experience the mound at Cooperstown. (Later that evening, the pitcher's Dad found one of the Clutch coaches and thanked him for allowing his son to experience this opportunity.)

After the 6th, the game ended 10-5. The Clutch had gone 6-0 in pool play,earned the 10 seed out of 104 teams and all the while respected the game and their opponents.

After the last game of the day, the Clutch checked out for a team dinner at Redneck BBQ. It was so fun to sit back and watch the team bond over another meal. This group of boys have grinded it out over the last three years- tough workouts, up and downs on the field and here they were living the dream in Cooperstown.

At 10PM the team reported for their evening meeting. After reflecting on the day - the number one thing the boys were thankful for was accomplishing their stated goal of going 6-0 in pool play. The boys were also thankful for the time to hang out and of course MORE home runs.

Established in 2005, Hard 90 Baseball has been traveling to Cooperstown each year. This is an amazing trip where players are able to truly enjoy "youth" baseball and through this process mature to get ready for high school. Hard 90 is currently forming high level teams for Cooperstown 2020 and Cooperstown 2021. Register your interest for our youth travel teams. Sign up today as spots are limited.